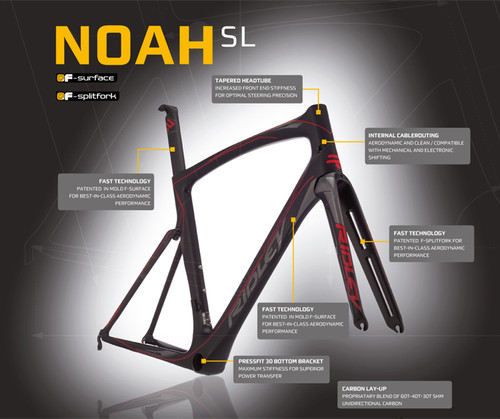 Some of the great Belgian cycling stories have humble beginnings. The athletes, the races, they all had to start somewhere on their paths to glory. So it is with a great Belgian bike brand. Ridley started quietly in 1990, subcontracting custom made frame construction. It became a separate brand in 1997. Through it all, the heart of Belgian spirit guides the decisions we make and the bikes we offer. The result is a bike brand recognized among pro-tour teams for bringing innovative solutions and unparalleled craftsmanship to the industry. Ridley & cycling: one family, one passion.

Ridley has a simple development philosophy: building the best bikes in the world! The blueprint of each design is always from the same perspective. Cycling enthusiasts, professionals, bicycle clubs, all have the same desire: Cycling on the best and fastest bike in the world.

Ridley have mainly focused on aerodynamics in the last years. Since their bikes were already as stiff as possible, and lighter than the UCI limit Ridley decided that they could make the most progress in terms of aerodynamics. This resulted in three unique patents (F-Brake, F-Splitfork and F-Surface), which together form the FAST concept.

The Noah SL incorporates 2 of Ridley's FAST-Concept technologie, F-Surface and F-Splitfork. These combined technologies offer up to 2km/h advantage in the sprint and up to 15 watts less power input needed to average a 40km/h breakaway. The Noah SL captures the essence of speed and performance in an ultralight package and via some of the most sophisticated aerodynamic technology in the industry. It relies upon lessons learned from a strong racing heritage, and the design sets a new benchmark in the aero category. Form-follows-function design principle, where every detail has been studied and tested to reach ultimate performance

We love this Ridley Noah Frameset.