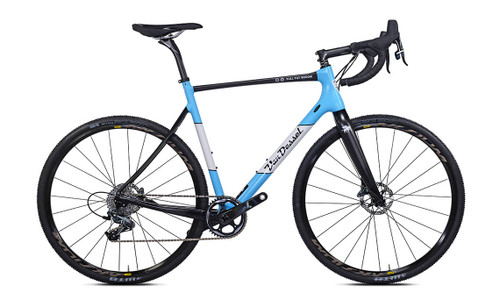 This is a full carbon cross frame that isn't messing around. Tuned for super responsive acceleration off start lines, through hole shots, out of hairpins and wherever else instantaneous speed is needed. Oh, and we added bottle cage bosses, cuz humans get thirsty. But forget cantilevers, this frameset is disc only. Not to mention light, smooth, responsive and thru-axle or quick release compatible.

The Van Dessel Full Tilt Boogie cyclocross frame is all-new for 2015, and now the frame is fully dedicated to disc brakes—no disc brake mounts that look like an afterthought as we saw on a previous model.

Back in May, we got an early peek at the upcoming frame, but now we’re building up a Full Tilt Boogie review bike, and here are Cyclocross Magazine’s photos of the just-arrived frame.

Edwin Bull and the team at Van Dessel went all-out on the redesign, and there are a number of noticeable changes from the previous model. Most obvious to the observer is the lack of canti posts. Post-mount disc brake mounts are present, front and rear, without the option of rim brakes.

Pick up the frame and you’ll notice an even more significant change—the frame went on a crash diet. While the previous Full Tilt Boogie reportedly tipped the scales at a bit over 1300 grams, our 2015 56cm FTB frame weighs just 1020 grams. That alone should make the weight gain that comes with disc brakes negligible for someone upgrading from a canti FTB frameset.